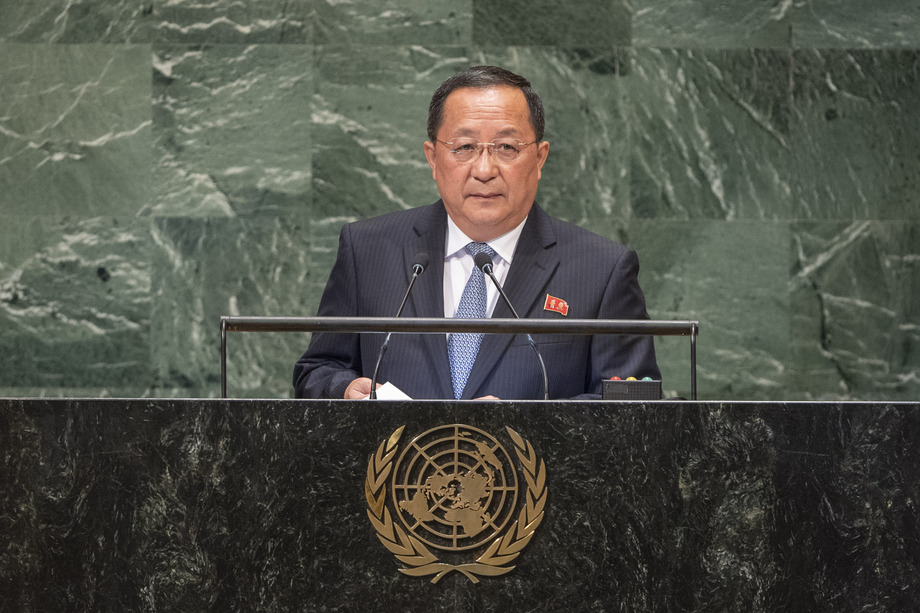 RI YONG HO, Minister for Foreign Affairs of the Democratic People’s Republic of Korea, noted that peace, threatened around the world, was being newly created on the Korean peninsula.  In April this year, Comrade Kim Jong Un, Chairman of the State Affairs Commission of his country, put forward a new strategy concentrating all efforts on the socialist economic reconstruction.  Because his country has sufficiently consolidated national defence capabilities, the Government is turning to economic construction and that requires a peaceful environment.  Comrade Chairman Kim Jong Un conducted energetic summit‑level diplomatic activities with a firm determination to turn the Korean Peninsula into a land of peace free to both nuclear weapons and threats, thus making an important breakthrough in improving North‑South relations and relations between the Democratic People’s Republic of Korea and the United States.

The key to consolidating peace and security in the Korean peninsula is to thoroughly implement the Joint Statement adopted in June at the historic summit in Singapore, he stressed.  That Statement contains all issues regarding solutions such as terminating the decades‑long hostility between the two countries and establishing new relations between the Democratic People’s Republic of Korea and the United States aimed at building a solid peace regime on the Peninsula while realizing its complete denuclearization.  Once it is implemented, and concerted efforts are made by all stakeholders at bringing down the barriers of mistrust and rebuilding trust, the current trend towards détente will turn into durable peace.  “The Korean Peninsula, the hottest spot in the globe, will become the cradle of peace and prosperity,” he stated.

Even before that summit, his Government took significant goodwill measures such as stopping nuclear and intercontinental ballistic missile tests, dismantling the nuclear test site in a transparent manner and affirming not to transfer nuclear weapons and technology under any circumstances, he continued.  “However, we do not see any corresponding response from the United States,” he said, noting its insistence on denuclearization‑first, as well as its increases to the level of pressure by sanctions.  “The perception that sanctions can bring us to our knees is a pipe dream,” he said, adding that the recent deadlock is because the United States relies on coercive methods that are lethal to trust‑building.

In less than five months, the leaders of the Democratic People’s Republic of Korea and the Republic of Korea met three times and through their meetings and talks, they have been building trust in each other, he pointed out.  The dialogues in many areas, including politics, military, humanitarian work and sports are very active, and the atmosphere of reconciliation has been high like never before.  If the party to the denuclearization issue had been the Republic of Korea and not the United States, the denuclearization of the Korean Peninsula would not have come to such a deadlock.  The United States, which possessed nuclear weapons before his country did, is the only country that used them in war.  “We did not even throw a pebble stone at the United States soil during the Korean War,” he said, but the United States threatened to drop atomic bombs in his country and kept bringing in strategic nuclear arsenals to its doorsteps.  At this critical juncture, he added, the United States should make a foresighted judgement that implementing the commitment made in Singapore will be in its best national interests.

Turning to his Government’s new policy line of concentrating all efforts on economic construction, he called it the right political choice, not only in improving people’s lives in the country but also in realizing the common desire of people around the world for peace.  Calling on the international community to support his country, he added that the United Nations has a role to play in the implementation of the Democratic People’s Republic of Korea‑United States Joint Statement.  The Security Council that was once so eager to express “concern” about the tense situation in the Korean Peninsula now keeps silent about the precious momentum for peace there.  Worse still, the Council is rejecting the proposal by some of its member States to issue a presidential statement that welcomes the summit and the Statement, he said, calling on the United Nations to support developments that are helpful in ensuring international peace.