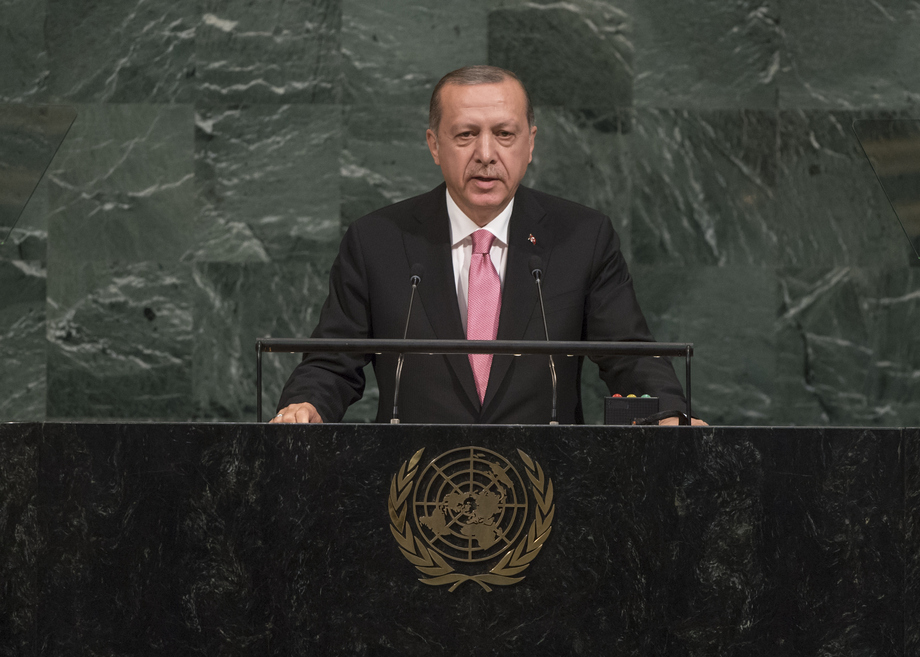 RECEP TAYYIP ERDOĞAN, President of Turkey, said that global peace and stability had regressed due to the spread of terrorism and war, violent actions of xenophobia, cultural racism and animosity towards Islam.  Sincere cooperation at the United Nations and development of a new perspective to promote world peace would be the most effective way to reverse that negative trend.  Turkey was pursuing enterprising foreign policy and humanitarian action to help create a safer, more prosperous world.  With deep historical ties to Syria, Turkey had not been indifferent to that country’s tragedy and it would continue humanitarian and political efforts to resolve it.  Turkey was hosting more than 3 million Syrian refugees, and with the Russian Federation and Iran, it had organized meetings in Astana with the conflicting parties to establish a permanent ceasefire in Syria.  Within the framework of the Astana agreements, Turkey was carrying out a new plan to secure the Idlib region.  It continued to take steps to host Syrian refugees and provide them with shelter, food, clothing, health care and education.  The cost of providing for Syrian refugees in Turkey had exceeded $30 billion, but the European Union had only sent 820 million euros out of the promised 3 billion euros, he said, calling on Governments and international organizations to fulfil their aid pledges.

Turkey, through various organizations, carried out humanitarian aid and development activities worldwide, including $1 billion for the reconstruction of Somalia which, he noted, could serve as an example for future efforts.  With $6 billion in aid in 2016, Turkey ranked as the world’s second-largest donor and top aid contributor in terms of gross national product (GNP), and it was working hard towards a sustainable world.  Turkey continued to fight terrorist organizations in the region such as Da’esh, the Kurdish Workers Party (PKK) and the Fethullah Gülen.  Turkey had recovered 243 residential areas and more than 2,000 square kilometres and neutralized almost 3,000 Da’esh militants thanks to Operation Euphrates Shield — the single greatest accomplishment against Da’esh since it occupied the region.

Actions by the Democratic Union Party-People’s Protection Units, or PYD-YPG, he continued, were a crime against humanity.  If the fight against Da’esh was not carried out legitimately, the world may come under the threat of similar terrorist entities.  Similar terror concerns were arising in Iraq, and he called upon the Kurdish regional government in that country to end its demand for independence, warning that “ignoring the clear and determined stance of Turkey on the matter may lead to a process that shall deprive the Iraqi Kurdish regional government [of] even the opportunities they currently enjoy”.  Turkey was closely following the situation in Libya and Yemen, where terrorist organizations were trying to establish influence, he said, and cautioned against repeating in Libya the mistakes made in Syria and Iraq.  He also called for the immediate resolution of the conflict in the Gulf region, citing the negative consequences of sanctions on the Qatari people, and reiterated support for the mediation efforts of Kuwait and the hope that Saudi Arabia would show sincere will for the resolution of that issue.

The issue of Palestine and the preservation of the historical status of Jerusalem and Haram al-Sharif remained significant concerns, he said.  The peace process could only continue if Israel immediately stopped illegal settlement activities and took steps towards a two-State solution.  He called upon the international community to support Palestinians in East Jerusalem, the West Bank, and Gaza in their struggle for an independent and geographically unified Palestinian State.  He further highlighted concerns over the Balkans and their integration with Euro-Atlantic institutions, the territorial integrity of Azerbaijan, and the need to resolve the conflicts in Nagorno-Karabakh, Abkhazia and South Ossetia.  On the question of Cyprus, he expressed sadness that the comprehensive negotiation process begun in 2008 had ended due in part to the stance of the Greek Cypriots.  Turkey would do its best to ensure that the national resources discovered in the Eastern Mediterranean would serve peace, stability and welfare of the region and that proposals for a solution should respect the rights of Turkish Cypriots.

He went on to express sadness for the Muslim community in the Rakhine region of Myanmar, who were being subjected to “almost an ethnic cleansing”, forcing hundreds of thousands to migrate, including to camps in Bangladesh that were not in a position to fulfil even their minimum humanitarian needs.  As was the case in Syria, the international community had not adequately addressed the Rohingyas’ humanitarian plight.  If that tragedy was not stopped, humanity would face another “dark stain”.  Turkey was working to address the crisis through various meetings — including with the Organization of Islamic Cooperation Contact Group later in the day — and assistance activities to aid Rohingya Muslims in Myanmar, Bangladesh and other countries.  Those developments and humanitarian tragedies illustrated the relevance of Turkey’s appeal to restructure the United Nations, particularly the Security Council, and he supported the Secretary‑General’s work towards that end.  The Council should have a democratic, transparent and effective structure comprising 20 members who served two-year terms and had the same rights and competencies.