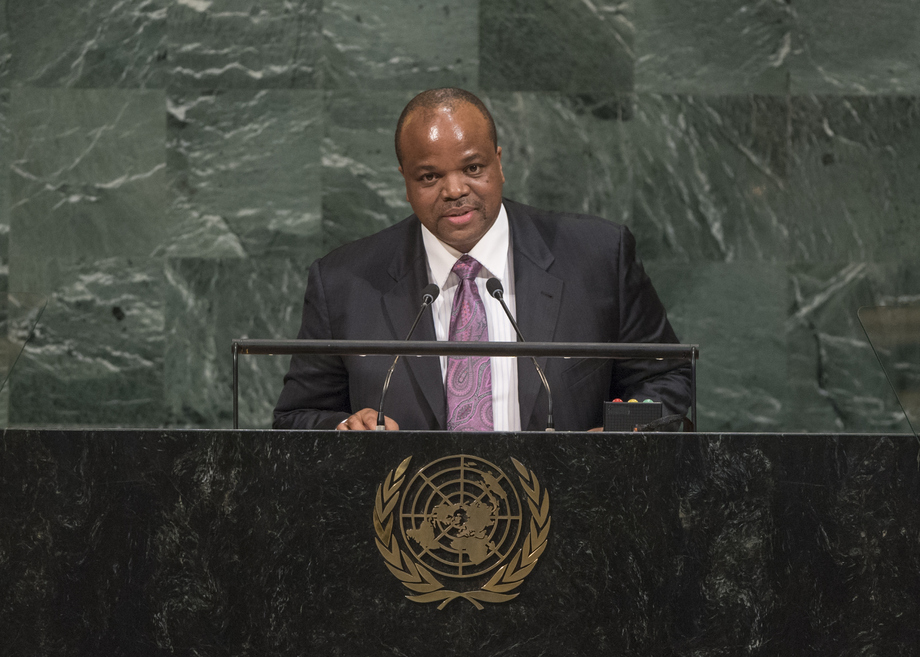 MSWATI III, King of Swaziland, said tangible progress must be made on reforming the United Nations, of which the Security Council was a key aspect.  To that end, Swaziland reiterated Africa’s call for permanent Council membership, in accordance with the Ezulwini Consensus, and urged the United Nations to heed the “voice of millions of Africans” wishing to contribute to the global community as equal partners.

He went on to urge Member States to address nuclear threats, saying “no country has the right to make the world an unsafe place to live in and we owe it to our people and to future generations to put a stop to it”.  Terrorism remained a significant threat and a setback to key developmental issues, he added.  Swaziland retained its firm belief in consultative, transparent and all-inclusive decision-making in pursuing social, economic, cultural and political development, he said, reiterating the country’s commitment to the Sustainable Development Goals.  It had undertaken several initiatives to mainstream and localize the Goals through public awareness campaigns, consultations, education and training.  The Sustainable Development Goals were integrated into the National Development Strategy, which had been revised to capture linkages with the Goals and the African Union Agenda 2063, and contained institutional arrangements to monitor implementation.

Climate change, which had caused severe drought conditions in the Southern African Development Community (SADC) in 2015/2016, had adversely affected crop production in the subregion, he said, thanking the United Nations, development partners, the international community, non-governmental organizations and local organizations for their support during that natural disaster.  While efforts to subsidize farming inputs and develop the water harvesting infrastructure needed to enhance food sufficiency would continue, donors were urged to fulfil their pledges to the green fund and to adopt policies that would balance the production of essential products with environmental sustainability.  Improvements had been made in education for sustainable development, he said, noting that Swaziland had seen the net enrolment ratio in primary schools rise from 79.2 per cent in 2000 to 97.7 per cent in 2015.  That reflected efforts to ensure that all children had access to education, regardless of their socioeconomic status.  School feeding schemes provided adequate nutrition, and several all-inclusive initiatives, including livelihood grants for the elderly, had been put in place to further support the 2030 Agenda and Agenda 2063.

He went on to state that Swaziland would host SADC’s University of Innovation and Technology, which would produce skilled manpower and provide solutions to meet the skills gap.  To that end, he called for support from highly educated facilitators and the international community.  The national workforce had overcome severe social, economic, and environmental challenges, as noted in the national guiding theme for 2017, “Rising Above Adversity to Create Prosperity for All”, he said.  He reiterated the critical need to address the “demographic dividend” by accelerating implementation of the African Union road map to investing in youth.

Swaziland aimed to be AIDS-free by 2022, and, as such, required collective action by the Government, international donors and other stakeholders to address the HIV and AIDS pandemic through concerted policies, he said.  Findings from the Swaziland HIV Incidence Measurement Survey revealed that more than 70 per cent viral load suppression among adults living with HIV had been achieved, as had a reduction of nearly 50 per cent in HIV incidence between 2011 and 2016.  He went on to highlight malaria eradication efforts, recalling that Swaziland had been elected Chair of the African Leaders Malaria Alliance during the African Union Summit in January 2017.  In closing, he called for Taiwan’s participation in the United Nations, saying that country had demonstrated commitment and aligned itself with the Organization’s priorities.