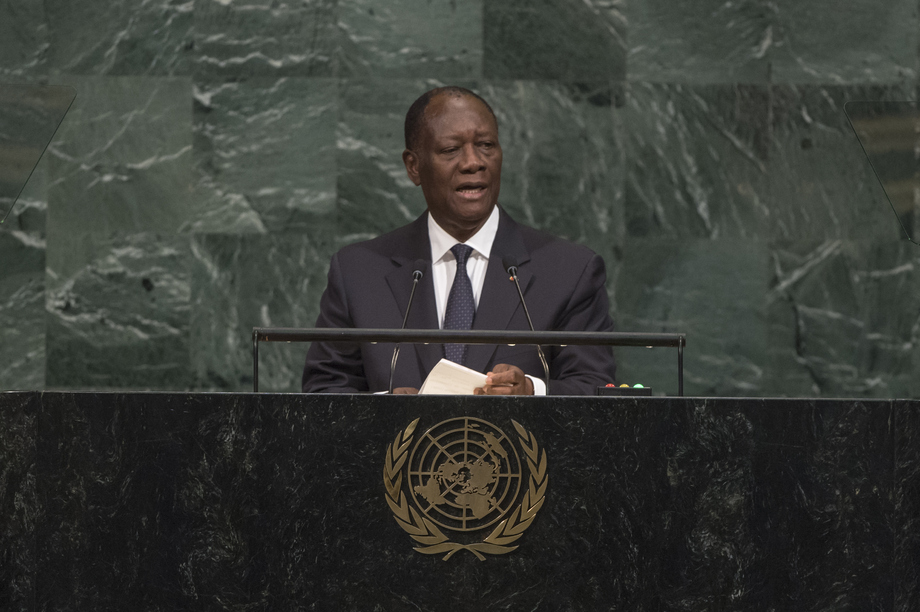 ALASSANE OUATTARA, President of Côte d’Ivoire, said his country’s election to the Security Council for the 2018-19 period would be an opportunity to share its experience on how to emerge from a crisis with effective cooperation from the United Nations.  The United Nations Operation in Côte d’Ivoire (UNOCI) was a rare success and should encourage the development of other initiatives to support peace.  Côte d’Ivoire would promote fair and pragmatic compromises while on the Council, he said, urging the international community to create a more balanced development model.

While the United Nations Global Counter-Terrorism Strategy had been strengthened since 2001, and encouraging operations had been carried out in the Middle East and Africa, the world had not found an adequate response to terrorism.  Actions would be in vain if Africa continued to be the “underbelly” of the anti-terrorist struggle, he said, pressing Governments to fulfil their pledges to support the G-5 Sahel countries [Burkina Faso, Chad, Mali, Mauritania and Niger].  Côte d’Ivoire would continue to support those countries while on the Council, he said, stressing that “without stability, there cannot be any development”.

On climate change, a significant concern that required swift action from all countries, he said Côte d’Ivoire would live up to the Paris Agreement through developments in energy, agriculture and environmental protection.  He called on others to do likewise, urging developed countries to fulfil their financial pledges.  He highlighted the plight of small islands in that regard, calling climate change a threat to international peace and security, and expressing support for a global environment pact recently proposed by France.

Turning to peace and security, he said Côte d’Ivoire would do its utmost during its Council term to address nuclear tensions on the Korean Peninsula.  He encouraged the international community to show restraint and enter into dialogue with the Democratic People’s Republic of Korea to create the conditions for lasting de-escalation.  Also, efforts to combat irregular migration, human trafficking and the migrant smuggling had not been adequately addressed.  He urged developed countries to mobilize resources and support developing countries in providing young people with employment, while origin countries must work to close smuggling networks.  To that end, he said the war in Libya must end.  For its part, Côte d’Ivoire had focused on awareness and prevention, aid provision and efforts to dismantle smuggling networks.

On the economic front, he said Côte d’Ivoire had achieved an average 9 per cent growth rate thanks to a successful microeconomic policy, hard work by its people, an improved business environment and major investments.  The 2016‑2020 national development plan aimed to distribute the “fruits” of such growth fairly and outlined bold social reforms to transform the country.  He called on all States and civil society organizations to ensure that international mobilization for the Sustainable Development Goals did not weaken, reiterating that developed countries must live up to their financing commitments, as agreed in the Addis Ababa Action Agenda in 2015.  As terrorism, global warming and nuclear tensions had weakened the collective security system, the international community must agree on how to modernize to effectively respond to threats.  The greatest importance should be placed on conflict prevention, and he welcomed the Joint United Nations-African Union Framework for Enhanced Partnership in Peace and Security in that regard.