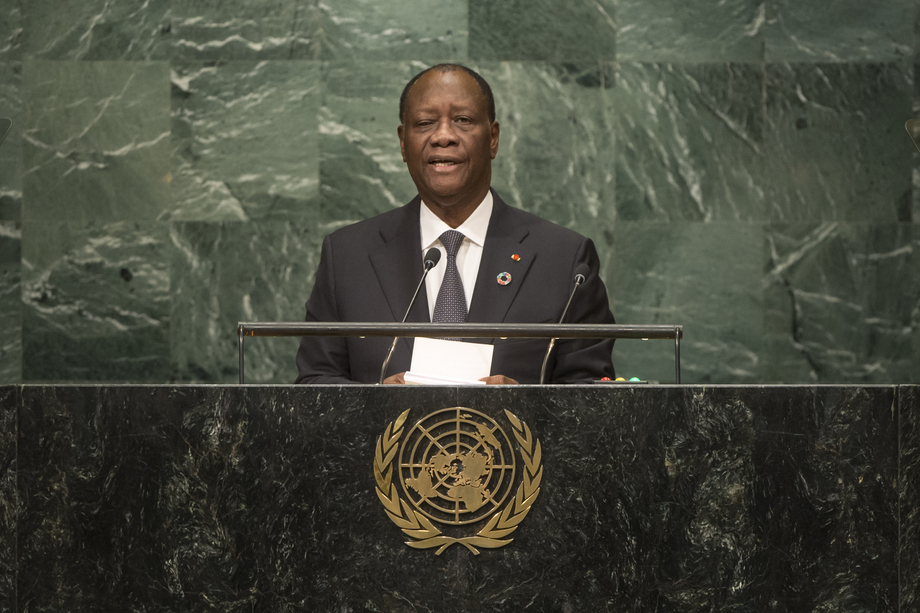 ALASSANE OUATTARA, President of Côte d’Ivoire, said grim economic and social circumstances could slow progress to combat poverty and implement development programmes.  “We must win the fight against abject poverty and suffering,” he stated, urging developed countries to respect commitments made at the third International Conference on Financing for Development, as well as those outlined in Goal 17 and the Green Climate Fund.  Utmost efforts were needed to ensure the Paris Agreement became a reality.  Côte d’Ivoire would deposit its ratification instruments before year-end.

Through its 2016-2020 development programme, his Government would mobilize the resources to implement the Goals, he continued.  The country’s positive economic position had allowed it to improve social indicators.  However, several global and regional conflicts remained a concern.  The Security Council and main stakeholders must do more to end suffering in Syria, the Middle East, South Sudan and Mali.  The Council, with its present configuration and working methods, could not effectively resolve conflicts.  He urged reform in order to bolster its legitimacy.  Côte d’Ivoire had experienced an attack in Grand-Bassam, a reminder that no country alone could end terrorism, and the United Nations must coordinate efforts to combat that scourge.

Without such support, developing countries would have to invest resources in national security, and away from social programmes, with serious consequences for their populations, he pointed out.  Worsening security in many countries had increased migratory flows; fear and isolation were not an appropriate response.  There was a need for solidarity in tackling the root causes of that phenomenon.  Countries of origin must do more to improve living conditions and create peace for their citizens.  For its part, Côte d’Ivoire continued to modernize its institutions and maintain an annual 9 per cent growth rate, enabling it to establish social and economic infrastructure.

“Côte d’Ivoire lives in peace,” he said, recalling that his people had organized presidential elections in 2015, and would soon renew the mandates of parliamentarians and vote on a new draft Constitution.  Amid such progress, the Council this year had lifted sanctions imposed in 2004.  In June 2017, the United Nations Operation in Côte d’Ivoire (UNOCI) would leave the country after 12 years.  His Government was proud of those developments.  Côte d’Ivoire was a candidate for a seat on the Security Council for 2018‑2019.  It had supported the United Nations Multidimensional Integrated Stabilization Mission in Mali (MINUSMA), working in a transport company from 2013 to 2015.  It was prepared send by year-end a 150‑person protection company to that mission.