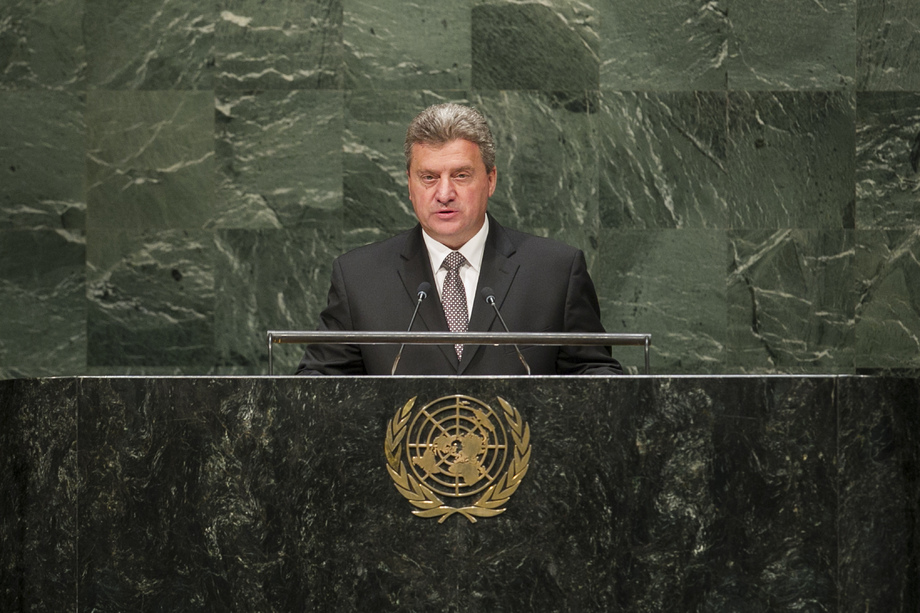 GJORGE IVANOV, President of the former Yugoslav Republic of Macedonia, said that recent natural disasters around the world, including in his region, were part of an alarming new reality that would transform the lives of future generations.  His was the first country in South-East Europe to have completed its third national report for the United Nations Framework Convention on Climate Change.  Additionally, it had taken steps in all key sectors of its economy and society to mitigate the effects of climate change, including reducing greenhouse gas emissions and increasing energy efficiency.

He said the rule of law was impossible without respect for human rights.  As a member of the United Nations Human Rights Council, his country was committed to protecting and promoting human rights and dignity worldwide.  Thanks to its own model of coexistence, which was based on respect for diversity, the country held itself to the highest standards in that regard.  At the same time, however, the Macedonian people were being denied those rights, including the right to self-determination, in the country’s effort to join the European Union.  Forcing his country to give up its identity to meet the conditions of membership in the Union would breach the United Nations’ founding principle.

His country, he noted, also had refused to change its identity as a precondition for membership in the North Atlantic Treaty Organization (NATO).  It took that stand on the basis of international law, which, he said, was the only thing that provided “predictability and certainty in this world order”.  On that basis, the International Court of Justice had advised in 2011 that blocking his country’s integration into NATO was illegal.  His country was ready to find a mutually acceptable resolution within the framework of international law.  As such, he urged the United Nations to devote its maximum attention to the issue.

Drawing attention to issues involving youth, he said that young people were victims of the violations in international order made by past and present generations.  Unless action was taken, they would remain victims of unjust systems.  His country was taking a leadership role on the matter, and together, with the United Nations Educational, Scientific and Cultural Organization (UNESCO), would organize next year’s dialogue of civilizations.  That forum would be dedicated entirely to young people.  To enhance dialogue and education on the issue, he proposed the establishment of an office for young Europeans of South-East Europe, and called on world leaders to devote more time and attention to youth.