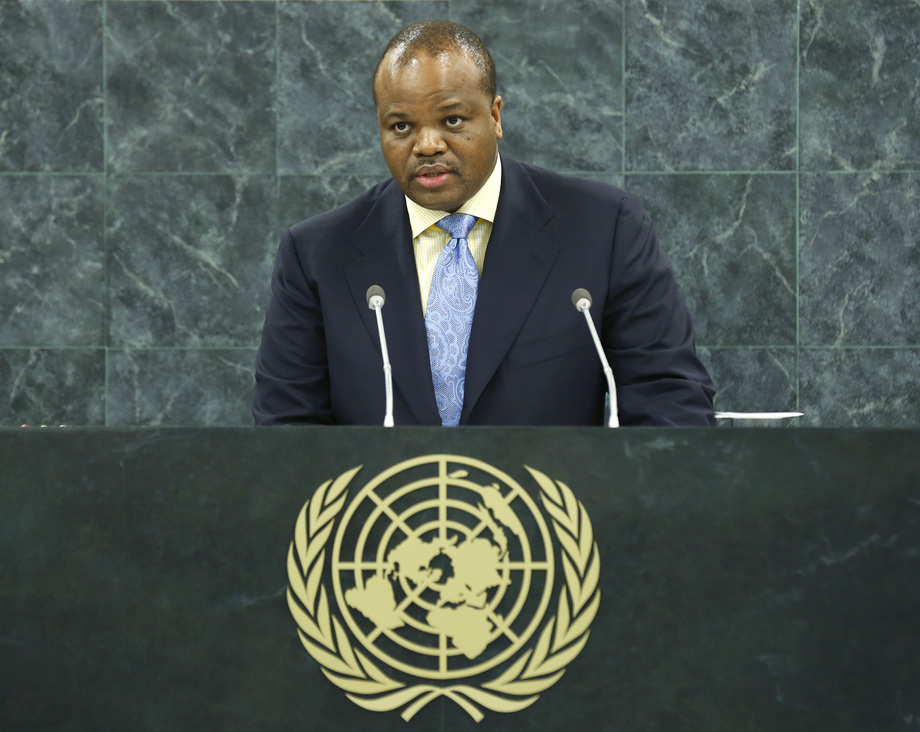 King MSWATI III of Swaziland said he was extremely disturbed by the deadly conflicts taking place in countries such as Syria, where innocent people on both sides were dying and many were forced to flee and become refugees. He encouraged all people of Syria to immediately cease fire and use dialogue as a means to solve their differences. “Using the barrel of a gun” did not help, he added; on the contrary, it left the Syrian people divided and with problems that would have devastating effects for a very long time. The United Nations mission’s findings on the use of chemical weapons in the country should be used to chart the way forward. Whatever action took place in Syria must fall within the mandate of the United Nations, which must act quickly, he concluded.

He highlighted the importance for leaders and Governments to be in constant consultations with their people at all times. It was, therefore, imperative to create forums allowing people to have access to their Government and to express themselves, as the lack thereof could lead to violent reactions nationally and have repercussions across borders. His country was committed to a process of consultation with the people, through dialogue with the Parliament and other forums. He drew attention to a recent peaceful election in his country, the most successful in years. His country’s system was based on a “monarchical democracy”, he explained, which was the result of a “marriage between the monarchy and the ballot box”. The ballot box was the will of the people, which provided advice and counsel to the King. In that way, transparency and accountability was ensured, he added.

Regarding the Millennium Development Goals, he said his country had made good progress in the areas of education, gender and empowerment of women, and malaria control. However, further efforts were needed to address poverty, HIV/AIDS, infant mortality, and maternal health. To solicit views on the post-2015 development agenda, intensive consultations were under way with all stakeholders, including traditional leaders, youth, women, business communities, and persons with disabilities, among others. Poverty was still a challenge, he stressed, and the recent financial crisis had contributed to its worsening. Ensuring food security remained a priority and should feature prominently in the next development agenda. To achieve internationally agreed goals, the provision of adequate financial resources, the transfer of environmentally sound technologies, and technical assistance to developing countries were critical. He, therefore, appealed to developed partners to honour the pledges they made towards the Green Climate Fund and sustainable development programmes. Achieving universal access to water and sanitation was also crucial for the people of Swaziland.

Echoing the position of many African countries, he reiterated the importance of reforming the Security Council, in order to have an organ that would give equal opportunities for all regions of the world to voice their opinions on matters of international security. In conclusion, he said that his country “will continue to encourage the positive interaction between the two sides of the Taiwan Strait in the international arena” and was happy to note that “the Republic of China on Taiwan” had increased its participation in United Nations specialized agencies and mechanisms.