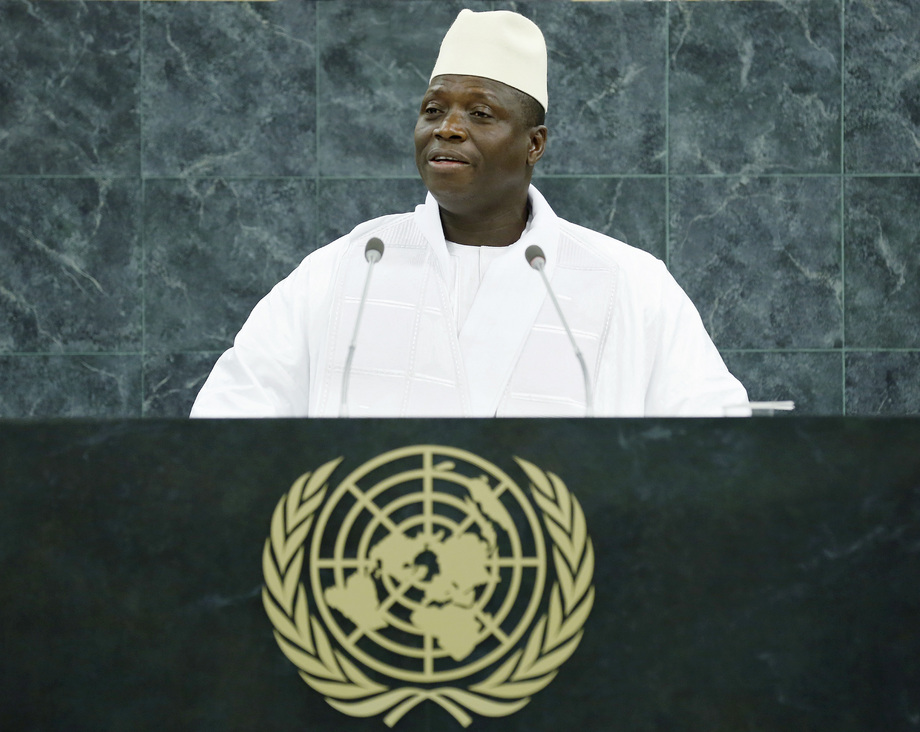 AL HADJI YAHYA A.J.J. JAMMEH, President of Gambia, said that civil strife and terrorism caused by the behaviour of some world Powers were undermining human security and even the viability of States. Poverty, hunger and disease still decimated countless communities, while the capacity to respond to man-made humanitarian crises remained discriminatory and inadequate, he stated. Noting the United Nations duties to find lasting solutions for peace and for the protection of human life, he called for informed and honest decisions, instead of “those driven by the interest of a few self-appointed gods thereby causing irreparable damage to the social fabric and economies of these countries in conflict.”

He also supported the view that regional organizations in the Middle East should be closely involved in negotiations for a solution to the Syrian conflict. Warning that attention had been diverted to the use of chemical weapons, he argued that the Security Council and all Powers behind that conflict must not only prevent the use of chemical weapons but also bring the war to an immediate end without preconditions.

As for the 2013 Millennium Development Goals report on Africa’s performance, he noted both substantial progress and remaining challenges. Among the latter was the difficulty of translating economic growth into decent job opportunities, improving service delivery and minimizing income, gender and spatial inequalities. Gambia was on track to achieve the target for net enrolment in primary education and literacy rates among those aged 15—24. Protecting African livelihoods required international, regional and country approaches to address both severe weather hazards and conflicts orchestrated by foreign Powers. Mitigating the adverse effects of climate change and putting an immediate end to the looting of natural resources by multinational companies called for a timely and decisive global response.

He identified the three biggest threats to human existence: excessive greed and addiction to material wealth, mostly through violent or immoral schemes; obsession with world domination, including the resolve to use nuclear, biological and chemical weapons; and, homosexuality in all its forms and manifestations being promoted as a human right by some Powers. Greed had led not only to colonization and the plundering of African and Asian human and material resources, but also to two wars that had been wrongly termed World Wars. On obsession with domination, he argued that all forms of human tragedy and catastrophe emanated from the same Western Powers. Regarding homosexuality, he said that all living things needed to reproduce for posterity. They would become extinct when they could no longer reproduce. Any person promoting the end of human reproduction was promoting human extinction.

Turning to other matters, he welcomed the democratically elected Government in Mali and called for a lasting solution to the political impasse in Guinea-Bissau. He pointed out that the Security Council had become a barrier to progress, peace and security in some instances “where lopsided decisions can only be classified as racist and misguided, and therefore unacceptable”. Africa’s legitimate quest for full representation on the Council needed to be urgently heeded. He also urged the United States to lift sanctions against Cuba, advocated for the United Nations membership of the Republic of China (Taiwan), and supported the two-State solution for Israel and Palestine.