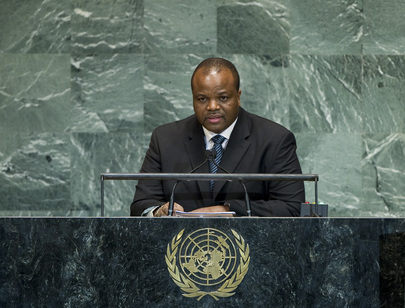 King MSWATI III of Swaziland said the Assembly was meeting at a time when the world faced numerous challenges, including an ongoing economic and financial crisis. The United Nations was the appropriate forum in which to deliberate such matters and work towards global solutions. Swaziland had not been spared fallout from the financial crisis and many of its social programmes aimed at enhancing delivery of Millennium objectives and creating jobs had been adversely affected. In addition, gains that had been made in the combat against HIV/AIDS were also at risk. He said that Swaziland continued to receive support from the Global Fund against AIDS, Malaria and Tuberculosis, and that such assistance had helped inject resources into its national health programme.

He said that as the international community sought to address the global economic crisis, stakeholders should be cognizant of the social implications of some of the recommended solutions. “Our strategies should not create more hardships, but should rather find answers that mitigate the difficulties we face”, he said, expressing confidence that his country would benefit from information that could be provided by States that had not been seriously impacted. He urged those countries to share their experiences and called on the United Nations to take up the ongoing effects of the crisis as a priority issue during the session.

On national matters, he said that Swaziland had convened last month a “people’s parliament” to spur dialogue on social, economic and political issues. The goal had been to craft solutions that would have the most impact on the lives of the people and ensure that every citizen was able to participate in that discussion. Swaziland believed in the full participation of all citizens in decision-making processes, and in fact, its Constitution and national development strategy were products of that approach. He went on to say that his Government was working hard to ratify core United Nations conventions, as well as continental and regional protocols.

Turning again to matters of global and regional concern, he encouraged efforts to ensure a swift end to conflicts in Africa, in the Democratic Republic of the Congo, Sudan and in North Africa. On the positive side, he hoped that new developments in Somalia, which had been without a stable Government for years, would bring about lasting peace. As for the Middle East, he said the war in Syria, which had claimed the lives of “too many” civilians, must come to an end. Swaziland urged the parties to work with the Joint Special Envoy towards a lasting solution, and urged the wider international community to cooperate on all fronts. He also called for a peaceful settlement to the Israeli-Palestinian conflict, in line with the two-State vision.

Further, while he was encouraged with recent positive developments between China and Taiwan, he hoped the two sides could resolve their differences and that the new situation would pave the way for Taiwan to participate fully in all United Nations agencies. Finally, he called for more concrete action to tackle climate change and protect the environment. The United Nations must ensure that Member States identified and put in place environmentally friendly technologies and practices. He also called on developed countries to honour the commitments they had made in June at the United Nations Conference eon Sustainable development, known as Rio+20.