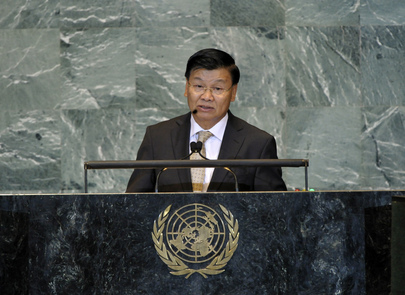 THONGLOUN SISOULITH, Deputy Prime Minister of the Lao People’s Democratic Republic, said emergencies such as political unrest in the Middle East and financial crisis in the European Union had challenged the credibility of the global governance mechanisms designed to address such daunting challenges. Climate change negotiations had shown no progress, despite the impending expiry of the Kyoto Protocol this year, while efforts to formulate an international arms trade instrument had failed. Indeed, the effectiveness of the United Nations must be strengthened, he stressed. Regional organizations, including the Association of South-East Asian Nations (ASEAN), were playing an increasingly important role in global issues. ASEAN was entering a crucial stage in its quest to establish, by 2015, a community based on three pillars — political-security, economic, and social-cultural. It would transition into a community that was politically stable, economically integrated and socially harmonious.

He said that his country, for its part, had done its utmost to fulfil its international obligations through its policy of cooperation, which was based on the principles of equality, mutual benefit, and respect for the principles of independence, sovereignty and non-interference. In the last year, the Lao economy had grown at an average 8 per cent, while foreign direct investment had jumped more than 30 per cent. At the same time, the country faced challenges, he said, citing the existence of unexploded ordnance, which posed a major obstacle to socio-economic development. He called on States to sign up to the Convention on Cluster Munitions with a view to banning their use.

On other issues, he said the Lao People’s Democratic Republic aimed to graduate from least-developed status by 2020, and was honoured to be the host of the Ninth Asia-Europe Summit Meeting (ASEM 9) from 5-6 November, which was aimed at fostering dialogue on global issues of mutual interests. As for the Middle East, he called for implementing Security Council resolutions, and for a two-State solution, Israel and Palestine, living side by side in peace and security. He expressed support for the enhanced Palestinian membership to the United Nations. On another vital issue, he said the special challenges of landlocked developing countries stemmed from their distance from global markets and high transport costs, and called for a greater focus and more assistance to that vulnerable category of countries by implementing the Almaty Programme of Action and participating in its 10-year Review, to be held in 2014.