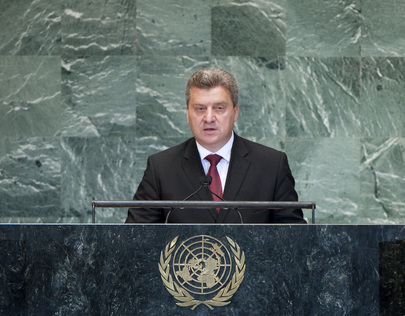 GJORGE IVANOV, President of the former Yugoslav Republic of Macedonia, said that in a diverse world, the United Nations Charter, with its principles and fundamental values, provided a common denominator that linked all peoples and countries, regardless of culture, language or religion. His Government was firmly dedicated to respecting the Charter. Since his country’s declaration of independence, peaceful dispute resolution had guided its behaviour as a responsible member of the international community. He welcomed that that issue was the topic of this year’s debate.

“An ounce of prevention is the same as a pound of medicine,” he said, noting that his country’s early experience hosting the United Nations Preventive Deployment Force had been a positive one. It was reasonable to pay attention to efficient resource use, which was whyhis country was following all activities related to the Secretary-General’s report on civilian capacity in the aftermath of conflict, and the implementation of recommendations made by the Senior Advisory Group. It was ready to share its experience in the area of democratic institution-building, based on the Macedonian inclusive model of “integration without assimilation”.

He went on to underline the importance of the rule of law, and its particular importance to the development, promotion and protection of human rights. Human rights should reinforce national sovereignty. The former Yugoslav Republic of Macedonia would continue making efforts to preserve and promote human rights, and to promote democracy, the rule of law and gender equality. Recalling his country’s chairmanship of the South-East European Cooperation Process, he said cooperation could be intensified by fulfilling assumed obligations and commitments. The Macedonian chairmanship would prioritize cooperation in agriculture, culture and tourism, science and education, cross-border cooperation and environmental protection. His country also expected its neighbours to show solidarity in action for a safer region.

He went on to explain that he had asked the Secretary-General to renew attention to the 2008 report of the independent expert on minority issues entitled: “Promotion and protection of all human rights — civil, political, economic, social and cultural rights, including the right to development”. That report recommended that his country’s southern neighbour should abstain from disputing whether there was a Macedonian minority and instead focus on the protection of the rights to self-identification and the freedoms of expression and association. That neighbour was urged to respect the judgements of the European Court of Human Rights, according to which the association should be allowed to use the word Macedonian to denote its name and to freely express its ethnic identity.

He had expressed his expectation that the Secretary-General use his authority to unblock talks taking place under his auspices, regarding the “name difference”. “I believe this process can lead to a solution,” he said. “But we cannot wait another 19 years.” The best way to reach a solution was to respect the United Nations Charter, the Interim Accord and the judgement of the International Court of Justice. Today, it seems “absurd” to be named “a former” nation. Recalling that the International Court of Justice 1948 advisory opinion had determined that placing additional criteria on United Nations membership contravened the United Nations Charter, he said that his country had been deprived of the right to self-identification.

Moreover, 10 months ago, the Court had adopted a judgement that his country had the right to refer to itself as “the Republic of Macedonia” in its relations with the other party and within international organizations. He appealed to his country’s neighbour to “work together in this direction”. His country looked forward to being partners and allies in building the future of their peoples and the region, and had proposed signing a bilateral agreement on evasion of double taxation. In closing, he said his country would actively participate in realizing the United Nations goals.