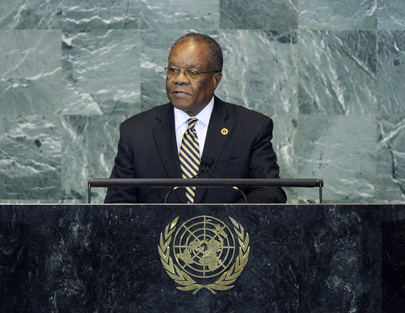 SIBUSISO BARNABAS DLAMINI, Prime Minister of Swaziland, congratulated South Sudan on its independence earlier this year, and noted that credit must also go to Sudan for its resolve in seeing the successful result through. The African Union had also been instrumental, using the vast experience of former leaders to bring African solutions to African problems. Similarly, he prayed with the people of Libya for a swift end to the conflict there, a sustainable solution and an inclusive Government for a brighter future.

The hugely damaging long-term effects of the war in Somalia had been compounded by a famine that could be blamed on climate change, he said, pointing out, however, that it would be better addressed through comprehensive collaboration by the international community. “Sadly, the world appears to have forgotten Somalia,” he said, noting that the country’s deepening piracy problem showed the need for a holistic approach to providing aid there. The world certainly did not want to send a message that interventions only took place when specific interests were threatened, he said.

The promotion of human rights was a common objective of all countries, and there were still challenges, he said, emphasizing that greater importance should be attached to the right to development so that everyone could enjoy the benefits of globalization. The right to life, the right to food and the right to health could promote cooperation in that regard. More assistance from developed countries could be provided in areas such as technology transfer, debt reduction and market access for the sake of the universal right of development.

Swaziland was proud to have made great strides against HIV/AIDS, he said, noting that by 2015, all children born of HIV-positive mothers would be born HIV-free. He went on to emphasize that in today’s interconnected world, Taiwan could contribute successfully to the international community. Swaziland therefore urged the United Nations to find a way for Taiwan to contribute to its mechanisms. There was doubt that the people of Taiwan had a functional need to be within the United Nations system and that their inclusion would be in the interest of the international community as well.