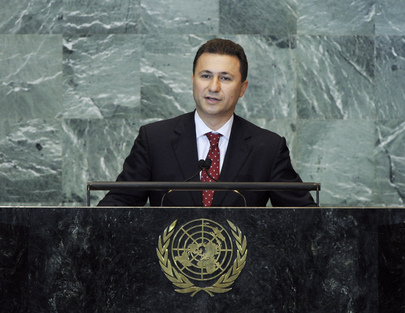 NIKOLA GRUEVSKI, President of the former Yugoslav Republic of Macedonia, said two decades after his country’s independence, it especially valued mediation for peaceful conflict settlement. The majority of conflicts were predictable, so there were realistic opportunities for effective diplomatic engagement towards their prevention. Regional and subregional organizations could significantly help mediators understand the essence of issues, and the European Union — to which the former Yugoslav Republic of Macedonia aspired and hoped for a quick start to accession negotiations, was created from historic reconciliation. The European experience would certainly contribute to the Organization’s basic objectives and tasks.

The world’s greatest crises have resulted from lack of vision and dedication, so commitment to the Millennium Development Goals must not weaken, he said. Climate change required an immediate and long-term solution, and though the former Yugoslav Republic of Macedonia experienced its effects less dramatically, it expressed solidarity with countries most exposed to the phenomenon, above all small island countries in the Pacific. Since the end of the cold war, the world had seen historic freedoms, but also new threats to peace. The so-called Arab Spring showed once more that democracy could be derived only from the people; human rights and freedoms should be an integral part of global governance.

Sometimes faintheartedness, scepticism and perhaps cynicism were strong among Member States, but those challenges could be defeated by an active, united approach in the service of noble objectives. The former Yugoslav Republic of Macedonia supported unreservedly readiness under the Secretary-General to minimize the risks of nuclear wars, but noted maintenance of peace and stability could not happen without sustainable development. “Allow me to make a suggestion: let us dedicate a leaders’ meeting during 2012 to one of the key themes aimed at fulfilling the millennium goals: education, innovations and technological progress as the factors for a sustainable development,” he said.

The former Yugoslav Republic of Macedonia had been acting responsibly for these past 20 years and it was acting responsibly to be a regional leader in all segments of modern living — economic reform, education, and human rights to name a few. But, it also treasured its heritage, and had many issues to resolve on the verge of its great transformation. Its southern neighbour objected to both its name and identity, in an artificial, absurd and utterly incomprehensible dispute. “Please give us support to be proud and dignified, and to avoid the situation to discuss a solution that would break our backbone: we seek a solution that will not harm our spirit, a name that will recognize our commitment, desire and determination for coexistence, community, individuality, and identity, but also our affiliation to the world, to their world which we are building, whose virtues we establish, whose future we fight for,” he said.

Fortunately, he said, 131 countries had made the choice to recognize his country by what it called itself — the Republic of Macedonia — and he thanked them. “Unfortunately, the rules of the world are arranged in such a manner that we cannot be called by what we call ourselves in this very body — the United Nations — nor can we join organizations we have worked hard to become members of and, in the case of NATO and the [European Union], have earned a right to be a part of. And this, frankly, is wrong,” he said.