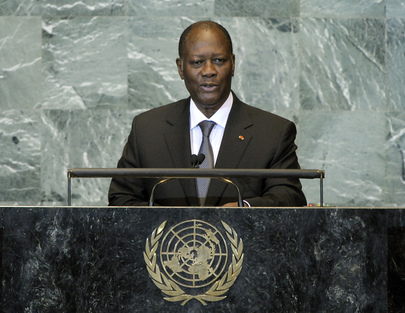 ALASSANE OUATTARA, President of Côte d’Ivoire, taking the floor for the first time in that capacity, thanked countries that had expressed faith in his nation’s struggle for democracy during a painful electoral crisis. Conveying deep gratitude to the United Nations for its help in settling the Ivorian crisis, he said the Assembly’s theme of “the role of mediation in the settlement of disputes” reflected the importance of placing the Organization at the heart of crisis resolution. The global body was tasked with using negotiation as a means for peacefully settling disputes, which required the determination of all Member States to seek negotiated settlements to ongoing and future crises — subregionally, regionally and internationally.

Recognizing South Sudan as the 193rd United Nations Member State, he said history had shown the virtue of negotiation in conflict resolution, seen in the end of apartheid and the “modest” progress in resolving the Israeli-Palestinian crisis. Recalling that the father of Côte d’Ivoire, Félix Houphouet-Boigny, had taken a pragmatic approach to conflict settlement through dialogue, he said he was ready to tirelessly do the same. “This is an absolute prerequisite for any social and economic development throughout the world,” he declared.

Peace would not be possible without a more balanced economic development, he said. However, strong economic growth alone would not be enough to ensure stability and security; it must be accompanied by transparent access to employment, especially for young people, as well as justice, and he urged adoption of a new development model that took into account environmental constraints. “Such a challenge cannot be met unless we work together,” he stressed. Further, crises in energy, food and environment showed that progress was fragile, and joint efforts must be undertaken in the multilateral context to find effective solutions.

In the Horn of African, people were suffering from famine caused by drought, and in light of such humanitarian tragedies, the commitment of all Member States was essential, he said. International peace and security was a major concern: terrorism, cross-border crime, and trafficking in people and drugs all threatened Africa. The United Nations had a role to play in enhancing international solidarity, which was essential in the search for solutions. Sufficient resources must be mobilized for research and development in farming, renewable energy and sustainable development, while military spending must be substantially reduced.

On other matters, he said discussions were under way within the framework of the tripartite agreement signed by Liberia, Ghana, Guinea and the Office of the United Nations High Commissioner for Refugees (UNHCR). That accord sought to ensure the rapid return of Ivorian refugees from those countries and protect Ivorian borders from armed troop movements and the trafficking of drugs and precious metals. Côte d’Ivoire’s ratification of the Optional Protocol to the Convention on the Rights of the Child on the Involvement of Children in Armed Conflict also showed its commitment to combating violence.

Describing the outcome of social and political conflict in his country, he said democracy today was based on the promise of the rule of law and a society that respected human rights. “Living together is the cornerstone of my Government’s programme,” he said, noting that reconciliation was a priority. The Truth and Reconciliation Commission aimed to establish dialogue among all levels of society and re-establish the country’s social fabric. Also, his Government was working to rebuild the country. The emergency programme, launched in March, had led to favourable outcomes, especially for people in Abidjan. It also was working to improve basic social services, especially health, education and electricity supply.

The holding of parliamentary elections before year’s end also would allow enhanced social justice, with United Nations support. With that, he expressed hope Côte d’Ivoire would be a country “reconciled with itself and other nations”, which operated on the basis of republican values, respected the independence of its judiciary and worked to combat impunity. Closing on that note of hope, he called for the United Nations ongoing involvement in seeking collective solutions to bring about a better world. “Côte d’Ivoire is the friend of all and the enemy of no one,” he declared.