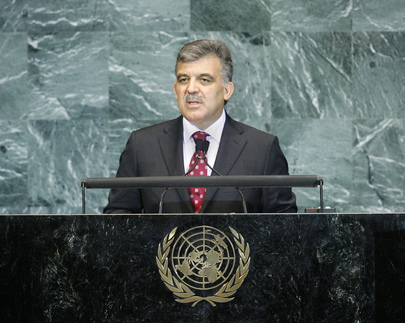 ABDULLAH GÜL, President of Turkey, called terrorism a pressing international challenge. The struggle against that scourge was bound to fail unless all terrorist organizations were confronted, irrespective of their political, ideological, ethnic or religious goals. He also said there could be no credible non-proliferation regime if the de facto existence of nuclear weapons by certain countries at the heart of the world’s most delicate regions was ignored. Efforts to create a zone free of weapons of mass destruction in the Middle East should be intensified, and a conference on such an entity should be convened in 2012.

Economic, demographic, ecological and biological issues were no longer “soft risks”, but rather clear and present threats to humankind, he said, calling for relevant action within the United Nations framework. The idea of a global rapid reaction capability to respond to disasters, food shortages and epidemics should be explored. Defence equipment no longer suitable for military purposes could also be pooled for disaster relief operations.

Turkey welcomed direct talks between Israel and the Palestinians, but progress towards lasting peace would be very difficult without an end to the humanitarian tragedy in Gaza, he continued. The Israeli attack on an international humanitarian aid convoy on the high seas in May had been a clear violation of international law; Turkey expected a formal apology and compensation for the families of the victims and for those who had been injured. The report of the fact-finding mission of the Human Rights Council on that incident provided a legal framework for establishing the facts, and Turkey looked forward to the successful completion of the work of the Panel of Inquiry.

The political stalemate the followed the 7 March elections in Iraq had aggravated the security situation in that country and had hindered the launch of comprehensive reconstruction; its new Government must be inclusive, effective and democratic, the President said. With the withdrawal of foreign combat troops, Turkey urged Iraq’s neighbours to act responsibly and support its territorial integrity, political unity and sovereignty. The Iranian nuclear issue could only be resolved in line with International Atomic Energy Agency (IAEA) norms and Non-Proliferation Treaty obligations, respecting the right to peaceful use of nuclear energy. The Tehran Declaration and the July gathering in Istanbul provided a window of opportunity; there was no alternative to diplomacy.

Turkey attached cardinal importance to peace, stability and economic development in the Balkans, the President stated. This year had been remarkable for Turkish-Greek relations, with the creation of a high-level cooperation council, and Turkey was determined to resolve its differences with Greece over the Aegean Sea, which should be “a sea of friendship”. Turkey shared the Secretary-General’s vision of a settlement to the Cyprus issue within reach before the end of this year, although the process should not be open-ended and the international community should take steps to end the isolation of Turkish Cypriots.

The international community faced unpredictable consequences due to its failure in Afghanistan, the President said. That country deserved close attention and sincere commitment during a historic process of transformation. In the wake of the terrible floods in Pakistan, it was critically important to help that country’s people and its democratic Government to heal their wounds.