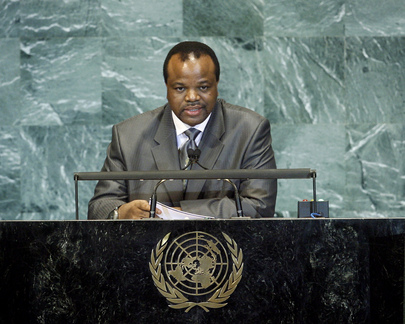 MSWATI III, King of Swaziland, pledged his support to the United Nations in its primary role of ensuring peaceful coexistence among all countries.  The Assembly’s theme on reaffirming the Organization’s central role in global governance was most opportune, since “we have been calling for all our voices to be heard”.  All conflicts could be resolved through peaceful dialogue and negotiations, and the United Nations was best positioned for that task.  There was no other place for multilateralism.  He called for finalizing reforms to the Security Council and he supported the common African position on that matter - that Africa should receive two permanent and five non-permanent seats on that body.

Indeed, the cooperation between the African Union and various regional blocs was starting to pay “handsome” dividends, he said.  With 2010 declared Africa’s “year of peace”, the continent had made it clear that perpetrators of coups, civil wars and all forms of conflict would be dealt with squarely and decisively.  “We are committed to the promotion of lasting peace,” he said, a prerequisite for sustainable development.  On global governance, the United Nations should work with relevant regional organizations to find a lasting solution to the issue of Morocco.

Elsewhere, he noted with concern continued conflict in Madagascar, Somalia, Darfur, and the Middle East, where Swaziland was following with interest efforts to ensure peace between the Israeli and Palestinian sides.  He supported that process and remained optimistic that Israelis and Palestinians could live together in harmony.  Turning to cross-straits relations, he noted with appreciation that “the Republic of China on Taiwan” and China had made impressive strides to promote mutual understanding and was pleased to see the former allowed to participate as observers in the World Health Organization.  He expressed hope to see “ Taiwan” participating in a similar manner in all other United Nations agencies.

Moving on, he said the spread of nuclear weapons made a mockery of efforts to promote peace and he called on the United Nations to enhance the International Atomic Energy Agency (IAEA)’s ability to enable inspectors to do their work more effectively.  Countries also must be made to comply with clear time frames in implementing the Nuclear Non-Proliferation Treaty.

On climate change, he looked forward to the upcoming meeting of the Conference of Parties to the United Nations Framework Convention on Climate Change in Mexico, saying it was essential for developed countries to honour pledges of assistance for adaptation and mitigation efforts in developing nations.  As for poverty alleviation, Swaziland’s focus was on limiting raw material exports and emphasizing production of finished goods.  The Kingdom also continued to promote equality in all development spheres.