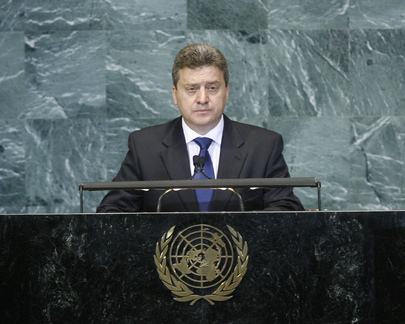 GJORGE IVANOV, President the former Yugoslav Republic of Macedonia, said the global economic and financial crisis was a challenge which could set back progress made in implementing the Millennium Development Goals. The United Nations and its Member States had dealt with those challenges successfully, through the use of adequate solutions that had been quickly identified and implemented in a cooperative manner. National and global security and prosperity rested on the foundation of solid economics, a sound financial system and social security. Five years ahead of the deadline to meet the Goals, the world must not yield, even in light of the decelerated pace of implementation.

The former Yugoslav Republic of Macedonia remained strongly committed to fulfilling the Millennium Goals and had incorporated them into its national legislation and strategies for economic and sustainable development, he said. Climate change was a serious threat to the planet, and recent natural disasters and humanitarian catastrophes showed that the planet reacted to the “irresponsible attitude of humanity towards nature”. The struggle to preserve nature must be declarative, globally led and present within every community, town and State. There must be a common, worldwide fight to preserve human life in harmony with the needs of the planet.

His country was ready to adequately contribute to all efforts to tackle international challenges. The Government had undertaken several initiatives with a focus on raising awareness, education and culture on reducing electricity use, promoting the use of alternative energy and the reduction of harmful emissions. The world unfortunately still faced daily peace and security challenges. In certain regions, there remained age-old “frozen conflicts” and new tensions were emerging. The consequences of the global financial and economic crises, as well as the slow pace of implementing the Millennium Goals, had a serious impact on such tensions. He declared: “Only by promoting peace, human rights and rule of law with dialogue and tolerance can we make the world a just and fair place to live in”.

With regard to restoring the Organization’s role in global governance, he said that his country supported joint efforts to improve the overall coherence of the United Nations system. The functioning of the Organization needed to be redefined so that it could respond to the demands and priorities of all Member States. He called for the creation of a highly functional global governance organization, one in which there were no overlapping mandates. Moreover, it should strive for maximum effectiveness with the appropriate and transparent use of existing resources.

Since gaining its independence, his country had been committed to substantial reforms in all areas and aimed at promoting democracy. Its achievements in that regard were internationally recognized, as his country expected a date for opening accession negotiations with the European as well as an invitation to join the North Atlantic Treaty Organization (NATO). Furthermore, his country was working to resolve its differences with Greece within the framework of mechanisms established by United Nations resolutions.

He declared that his country would do everything in its capacity to nurture close and friendly relations with neighbouring Greece and its people. A solution could be reached only if the United Nations Charter, its resolutions and international law were respected. He had met yesterday with the Greek Prime Minister with the goal of creating an atmosphere of mutual trust and understanding. He hoped to find a mutually acceptable solution.