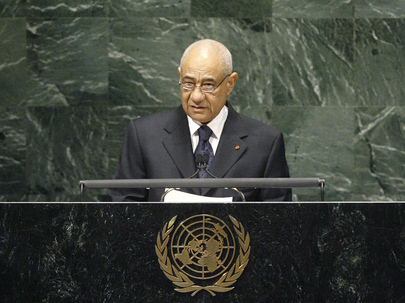 JEAN-MARIE KACOU GERVAIS, Minister for Foreign Affairs and African Integration of C ôte d’Ivoire, said the United Nations must remain credible by adapting to a changed environment since its 1945 founding.  Because the Organization was at the crossroads of the world’s problems, it was there where the sources and solutions to them must be found.  Various questions centred on poverty, an open wound for humanity.  Women were losing lives as they gave life, while children were dying before they reached the age of 5.  A powerless world meant that the United Nations must be adapted to find proper responses and show the path forward.  Reform must see the enlargement of the Security Council and improvement in its working methods.  To that end, he expressed hope for the success of intergovernmental negotiations.

On other matters, he said the global economic crisis had worsened countries’ vulnerabilities and threatened collective security.  The purchasing power of developing nations had dropped, as had their inputs of ODA and foreign direct investment.  Indeed, global recovery was fragile and efforts must be combined to find the most appropriate solutions to enhance equitable growth.  He called on industrialized countries to follow through with assistance pledges and reform of the international financial architecture.  That reform should not only allow poor countries more adequate representation in global financial bodies, but also see the creation of policies better adapted to their needs.  The declaration adopted at the 2010 Group of Eight (G-8) Summit underlined the urgent action needed to meet the Millennium Development Goals, notably to improve women’s health, and in that context, he welcomed the creation of UN Women.

Food insecurity was another immediate obstacle to development that required lasting solutions in terms of financing for agriculture.  He welcomed efforts by the World Bank, regional development banks and United Nations funds and agencies for financing that sector.  He also welcomed the 2009 L’Aquila Initiative, which allowed for the mobilization of $20 billion for agriculture for developing countries, as well as the launch of the Global Programme for Agriculture and Food Security.  Turning to climate change, he said clear, committed international responses were needed and solutions found that ensured a more balanced world.  To that end, he welcomed progress made at the Copenhagen Climate Change summit, saying that, though an accord had not been reached, progress had been made, notably in the allocation of $30 billion for adaptation measures in developing countries, which should allow his country to combat climate change.

On human rights, he said the situation in his country had improved, thanks to help from non-governmental organizations and Côte d’Ivoire’s decision to go before the Human Rights Council’s Universal Periodic Review.  Finally, he said the United Nations’ role was vital in resolving armed conflicts around the world, especially Africa, which could not ensure its own economic and social developments despite its great potential to do so.  In his country, the Ouagadougou accord allows for presidential elections set for 31 October.  Signs of progress in the peace process included the determination of players to move towards free, transparent elections.  In closing, he said recent crises had shown that global development had been threatened more than ever before.  The United Nations had a crucial role in finding effective, appropriate solutions to such problems and to that end, must reassert its position in global governance.