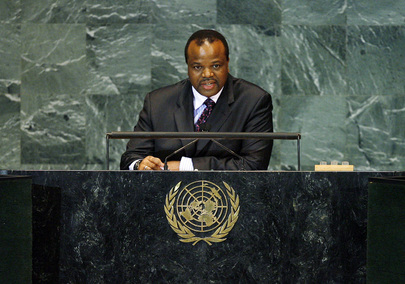 King MSWATI III of Swaziland said Africa was afflicted with multiple problems that were seriously hindering progress in the areas of health, economy, poverty and social welfare, all part of the Millennium Development Goals.  Africa’s intention, however, was to grow from being a continent of “third world countries” to gaining “first world” status, which called for Africa to work “harder and smarter” in generating a strong economy to better the lives of all.
Because resources were limited, he continued, Africa relied on the United Nations for assistance with forging partnerships to help its economies grow.  Developed nations should recognize Africa’s hard work by increasing African countries’ access to soft loans and grants in support of development programmes and poverty reduction strategies.  Also, the United Nations should support national initiatives, including by taking into account the setback to development agendas caused by the global financial crisis.
In his country, Government interventions had been needed to rescue sectors such as the pulp and textile industries.  Those measures had been coupled with initiatives to mobilize resources and promote financial inclusion so as to stimulate growth at the grass-roots level.
Moving on, he called for unity in condemning the disturbances and violence that still flared in the world, including in the form of wars and coups.  He said nations must ensure those acts were not supported or encouraged.  Instead, sympathizers and sponsors should be isolated and discouraged.  Nuclear arms would also have to be eradicated, he said, adding that the United Nations must set targets and timelines to ensure compliance towards that end.
Turning to other concerns, he cited the delay in reforming the United Nations Security Council.  Africa had stated its views with firm and clear resolutions, including those affirmed by the recent Non-Aligned Movement Summit.  The issue should now be addressed with the urgency it deserved, especially in light of statements made by fellow leaders calling for the United Nations to “turn anew” by approaching global matters collectively.  Serious Council reform would clearly demonstrate the new approach.
Finally, he said it was encouraging that the one-day Climate Change Summit had been held prior to the Assembly session, since environmental protection was critical to all development strategies.  That Summit had mobilized political support for efforts leading up to the Copenhagen Conference, which would lead to the transfer of skills and technology that would enable developing countries to pursue growth while avoiding mistakes of the past.
The importance of protecting the environment could not be overemphasized, he said, stressing that precious ecosystems and natural resources must be preserved for future generations.  A major climate change fund should be established at the Copenhagen summit as one mechanism among the funding solutions that would be predictable, accessible and incremental in providing assistance for climate change projects.