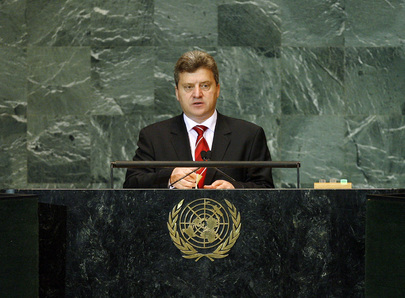 GJORGE IVANOV, President of the Former Yugoslav Republic of Macedonia, emphasized the necessity for the United Nations to help resolve the financial crisis and prevent future crises.  He stressed that current economic problems should not shift the focus from what he called “the absolute priority”, the achievement of the Millennium Development Goals.  Equally pressing was dealing with one of the biggest challenges for humanity, climate change.  “Our children, the generations to come, oblige us to preserve our planet.”  The last minutes were being counted down and coordinated and serious measures could no longer be postponed.  His country had been a party to the Convention on Climate Change for a decade and had had great expectations for the Copenhagen conference.  He pledged his country’s commitment to related global efforts.
In meeting those challenges, as well as achieving what he called the “primary goals” of peace, democracy and human rights, he said effective multilateralism was crucial.  In that effort, he strongly supported efforts towards improvement of United Nations system coherence.  He said that dialogue was also important, pointing out that his country represented an example of successful multi-ethnic and multi-confessional cohabitation, and hosted the Summit on Dialogue among Civilizations in 2003, which in turn had become an annual meeting organized in the South-East Europe region, under United Nations Educational, Scientific and Cultural Organization (UNESCO) auspices.
His country, he said, was also committed to the promotion of democracy, to the improvement of the standard of living of its citizens and to essential reforms in all spheres, and had achieved impressive progress in those areas.  It, therefore, expected the start of accession negotiations with the European Union.  It had also fulfilled all foreseen conditions for membership in the North Atlantic Treaty Organization (NATO).  It was an active supporter of regional cooperation, so integration with those groups was a strategic priority.
However, the actions of its southern neighbour, he said, prevented his country from NATO membership and were contrary to the obligations undertaken in the 1995 Interim Agreement.  Those actions had been taken to influence the outcome of negotiations held under the auspices of the United Nations.  He stressed that his country was “sincerely dedicated” to resolving differences with its southern neighbour within the mechanisms set forth in United Nations resolutions.  Despite the absurdity of the dispute, his country sincerely hoped that the only obstacle preventing it from joining the Euro-Atlantic family would soon be removed.
He wanted to state clearly that his country was prepared to discuss the issues foreseen in the United Nations resolutions only, and was prepared for a solution that was a reasonable and fair compromise, which should not touch upon, nor deny national, cultural and linguistic identity in any way.  At the same time, there was no more sovereign right than the right of self-determination and self-identification, “A right cherished by many generations before us.”  He hoped that Greece would abandon its policy of taking actions from positions of power in order to unfavourably influence the outcome of the disputed issue and that, “We can reach a solution that will have no winners and no losers.”