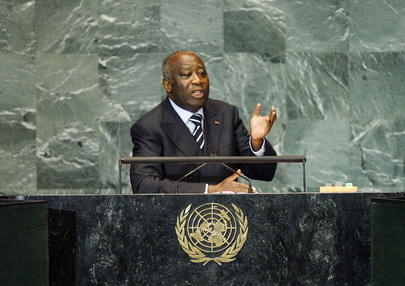 LAURENT GBAGBO, President of Côte d’Ivoire, said his country had resorted to internal methods to help usher the State, as well as former rebels, towards a peace process, which had led to the end of conflict and the start of preparations for general elections.  Acknowledging the support of the United Nations and friendly nations in helping the country return to peace, he said presidential elections would take place on 29 November 2009.
He said the 2008 energy crisis had been unprecedented, citing that the price of a barrel of crude oil had shot up to more than $140.  Furthermore, the food and financial crises had rapidly escalated into a deep economic crisis.  The world had recognized the effect of those three simultaneous crises on the social and political situation, creating a wave of panic and uncertainty.  Consequently, international organizations such as the International Monetary Fund (IMF) mobilized on behalf of the international community, to rise to those unbridled political and social challenges, even in Europe.
Nonetheless, he said, the financial crisis had, contrary to the world’s timid or even diffident reaction, impacted Africa more than anywhere else.  Indeed, the continent’s economic and social fragility had been exposed.  No country, in Africa or elsewhere, had escaped the economic upheavals, proving it was high time for reforms in the global financial and monetary systems.
The United Nations had to undergo reform to continue playing a key role in multilateral diplomacy, he said, noting that the Organization must take important steps to curb the growth of extremism, through intercultural dialogue.  Recalling the High-level Interreligious Dialogue for a Culture of Peace that had taken place in November 2008, he said that event reinforced the need to sensitize the world to the importance of preventive diplomacy, among other things.  Member States might consider creating a mechanism for a permanent dialogue among civilizations.
On global peace and security, he said the only way to ensure sustainable peace efficiently was to ensure a democratic Security Council that would treat conflicts and situations equitably.  At the same time, while more countries should be represented among the Council’s membership, that body should do more to bolster its tools for conflict prevention, management and resolution.  The Council could also consider passing such tasks along to regional and sub regional bodies.
He also stressed that world peace and security relied on the eradication of poverty, which his country was concerned about and, to that end, welcomed the results of recent meetings on the Millennium Goals and development in Africa.  Indebted countries were bound to sink and the world would sink with them unless swift action was taken to shore up the global economic system, reduce debt burdens, and ensure the achievement of the Millennium Goals.
Deserts in West Africa were advancing towards coastlines, wiping out towns in Côte d’Ivoire and Ghana, he warned.  Floods and expanding deserts were now common in West Africa.  While Africa wanted to do its part to combat the evolving scourge of climate change, it felt abandoned by the wider international community.  Also troubling was that in the near future, clean water would be difficult to find and that not all countries had the resources to transform sea water into potable water.  He called for a United Nations meeting that would lead to decisive action on such maters.